"According to ePaper Insight statistics, by the end of 2021, Shanghai has installed more than 6,000 sets of 31.2-inch e-paper bus stops and 13.3-inch e-paper station stops and station poles, basically realizing the full coverage of non-electric stations in Puxi. It also makes Shanghai a batch construction city of the world's first e-paper bus station pole, occupying the largest market share in this field, opening the first batch outdoor application of e-paper.”


Europe always had stricter regulations on environmental issues than any other country in the world. In 2022, the EU plans to update the Energy Labelling Act, which will set stricter energy efficiency indexes, tighten TV energy efficiency regulations and revoke the exemption for TVs above 4K. The plan will be officially executed in March 2023, which means 8K TVs may not be available for sale next year.

As the symbol of the modern city in the 21st century, colorful outdoor commercial or public display billboard is an important part of the city's appearance. Under the trend of global low-carbon and green development initiative, outdoor display billboard products made of low-energy e-paper will gain growth opportunities and contribute to the construction of modern smart cities.

From the successive implementation of the EU's strict energy consumption policies, it can be seen that the world's major consumer markets are making great strides to reduce energy consumption and develop in a greener and low-carbon direction. If we look back to our country, we are also taking action.


Under the two-carbon strategy, China is expected to reach carbon peak by 2030 and carbon neutrality by 2060. In order to achieve this goal, Shanghai has formulated an action plan for carbon emissions peaking in the 14th Five-Year Plan and 2035 Long-term Goals to implement dual control of total energy consumption and intensity to ensure that carbon emissions peak before 2025. 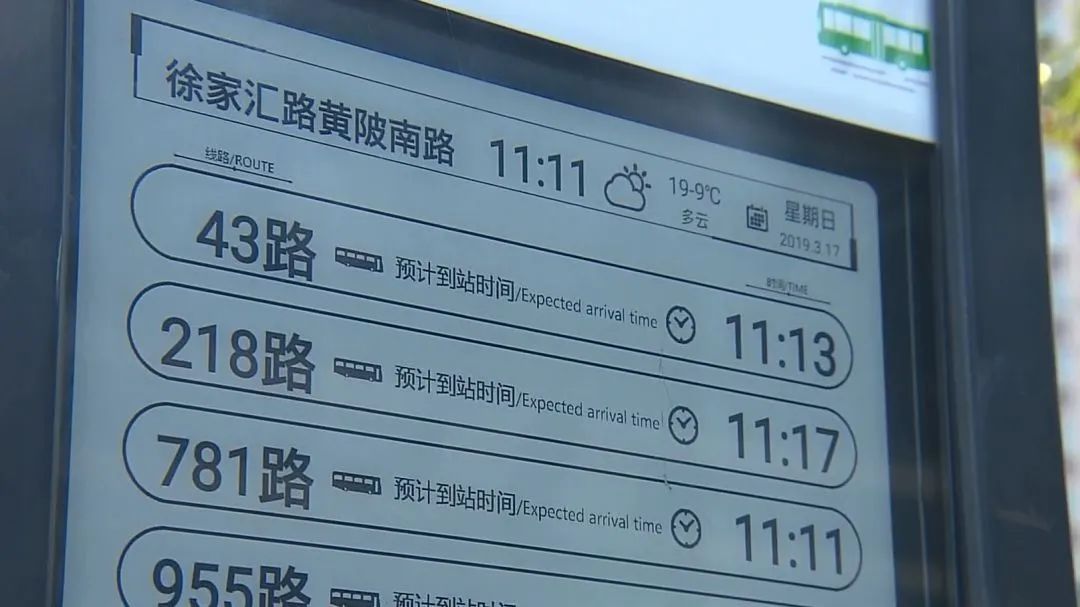 This project is not only an attempt to apply low-energy e-paper in the public domain, but also an exploration and typical case of green technology of e-paper helping Shanghai smart city to achieve zero carbon emission, and an important measure to establish a green low-carbon smart city.

Back in 2016, Shanghai discussed the upgrade of the 32-inch LCD display information reserved in a large number of bus stops built during the 2010 World Expo, and the power connection construction required huge manpower and material investment, and it would also cause long-term traffic jams and other social problems in Puxi, so the low-carbon display technology of e-paper entered the vision of public transport decision makers.

In May 2018, the first solar-powered 31.2-inch e-paper bus stop sign on Xujiahui Road in Shanghai was delivered, solving the intelligent informatization of non-electric stations and marking the official entry of e-paper into the field of electronic bus stop signs; In January 2019,1,500 sets of e-paper bus station poles were delivered, and all the e-paper bus station poles were powered by solar power, actively responding to the national slogan of "green environmental protection, energy saving and emission reduction", and fully realizing zero carbon emission in operation.

According to ePaper Insight statistics, by the end of 2021, Shanghai has installed more than 6,000 sets of 31.2-inch e-paper bus stops and 13.3-inch e-paper station stops and station poles, basically realizing the full coverage of non-electric stations in Puxi. It also makes Shanghai a batch construction city of the world's first e-paper bus station pole, occupying the largest market share in this field, opening the first batch outdoor application of e-paper.

As a model of national public transport, the case of e-paper bus stop signs in Shanghai has universal applicability in the industry, showing the certainty that e-paper stop signs must occupy a place in electronic stop signs. At present, the e-paper bus stop signs have covered Guangzhou, Shenzhen, Tianjin, Hangzhou, Hainan, Zhengzhou, Nanchang, Suzhou, Jiaxing, Shaoxing, Lianyungang and many other places.


What are the Advantages of E-paper Bus Stop Signs

Shanghai e-paper bus stop sign project has been completed and successfully operated for 3 years, this "1,500 solar e-paper bus stop signs" is not only the world's largest outdoor application of e-paper, but also successfully built the first zero-carbon bus stop in line with international standards in China, and is a representative case of zero-carbon emission in response to the two-carbon strategy initiative.

Electronic smart bus stop is a necessary part of our construction of smart city. Since 2015, as part of smart cities, many first- and second-tier cities have been fully building electronic bus stops, stop signs, bus shelters, etc. The development of display technology has also experienced LED, LCD, high luminance LCD, etc., which can be described as increasing power consumption.

From the point of view of construction, due to the complex wiring in urban areas, the average cost of pulling power per station is close to 100,000, while the suburban station wiring is not convenient, and it is even more unrealistic to pull power at each station. Therefore, from the perspective of the limiting factors of the electricity construction, the use of solar e-paper bus stop signs will be a good supplement to LCD screen station signs.

The electronic bus stop board composed of 31.2 inches of black and white e-paper display module connects to the cloud bus data server through 4G LTE Cat1 to obtain real-time bus arrival information data, such as the arrival time and the crowded condition of the bus No. 1, which is displayed on the 31.2 inches of e-paper bus stop billboard. The screen is clearly visible in the sun. Therefore, the e-paper bus stop sign is equipped with a battery using solar energy, which collects sunlight to charge during the day and provides power at night. It can maintain the normal operation of the station announcement system even on cloudy days for a week. 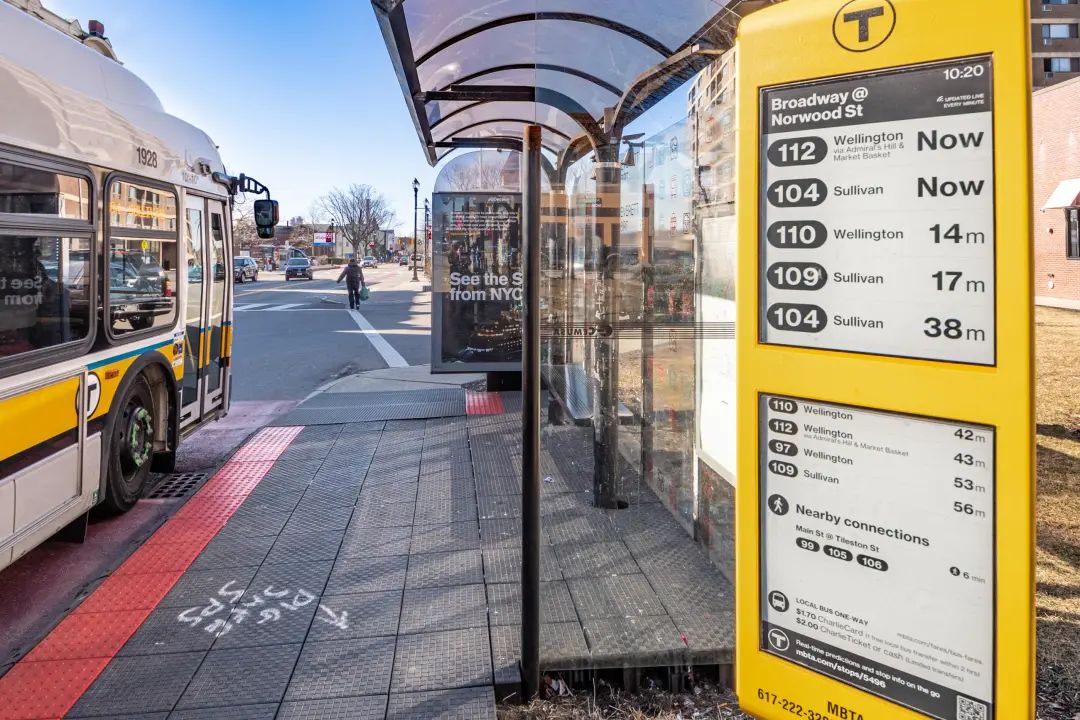 LCD display in the sunlight need to increase brightness to achieve better visual effect, and the readability is weak. Whether day or night, higher brightness for the eyes to read will cause discomfort. In recent years, the LED outdoor advertising large screen market has developed rapidly, but the regulations on how to limit the brightness are not perfect. Such as the shiny LED screen mounted on the car body moving in the traffic, the display brightness is too bright and dazzling will lead to visual blind areas. Excessive brightness of large advertising screens at night not only affects the safety of drivers, but also affects the normal life of surrounding residents. For LED outdoor billboards, light pollution is one of the more prominent problems.

From the point of view of light pollution, as more and more electronic stop signs and related outdoor signs are put into use, the use of LCD or high-brightness LCD products can add more color and vitality to the city, but for such products as bus stop signs that provide basic public information indication and reading, LCD screens are not the most friendly.

E-paper is a display technology that does not emit light itself, relies on natural light reflection imaging and bistable maintenance of static images without electricity, compared with LCD display, e-paper products will not produce "light pollution". It realizes the display of picture information through the environment light source through the reflection characteristics, with high contrast and stronger readability. Therefore, the integration of e-paper display technology and intelligent bus stop signs will inevitably give full play to the technical advantages of e-paper in some application scenarios.

In addition to applications in smart cities, e-paper without light pollution also has significant ecological benefits. For example, e-paper signs used in ecological protection areas will not affect the life of protected animals and plants in the park because they do not emit light and cause light pollution. It is worth mentioning that E Ink's e-paper technology obtained the Dark Sky certification of the International Dark Sky Association (IDA) in February 2022. It is also the first display technology in the world to be certified by IDA.

In terms of durability and stability, taking the Shanghai e-paper bus stop sign project as an example, it is undertaken by Shanghai APEP Information Technology Service Co., Ltd, a subsidiary of SHANGHAI JIUSHI (GROUP) CO., LTD. For outdoor application environment, according to the data of Shanghai APEP Information Technology Service Co., Ltd, they have made special adjustments to the 31.2 inch e-paper used for bus stop signs, and widened its working temperature from the original 0-50℃ to -15-65℃. This is also the first field where e-paper is used in large-scale outdoor mass production. Through the actual test of environmental changes in the Shanghai project throughout the year, e-paper has been able to work stably outdoors. The temperature width of -20-65 is being tested at the technical specification level.

The success of the e-paper bus stop project in Shanghai is bound to gradually drive the exploration of smart city road in other cities across the country, among which smart bus will have a lot of development space in the big scene of smart city. At present, the e-paper bus stop sign is generally composed of two 13.3-inch black and white e-paper display modules spliced together, combined with solar charging dual battery power supply system and background big data. As the Kaleido color e-paper technology platform developed by E Ink, a leading e-paper manufacturer, will be extended to outdoor billboards, outdoor information and signs and other applications, e-paper bus stop market will gradually move towards full color. The market for e-paper station signs will continue to grow, with the addition of color e-paper screens that display information such as weather advertisements from the original black and white e-paper screens that display station and bus information. 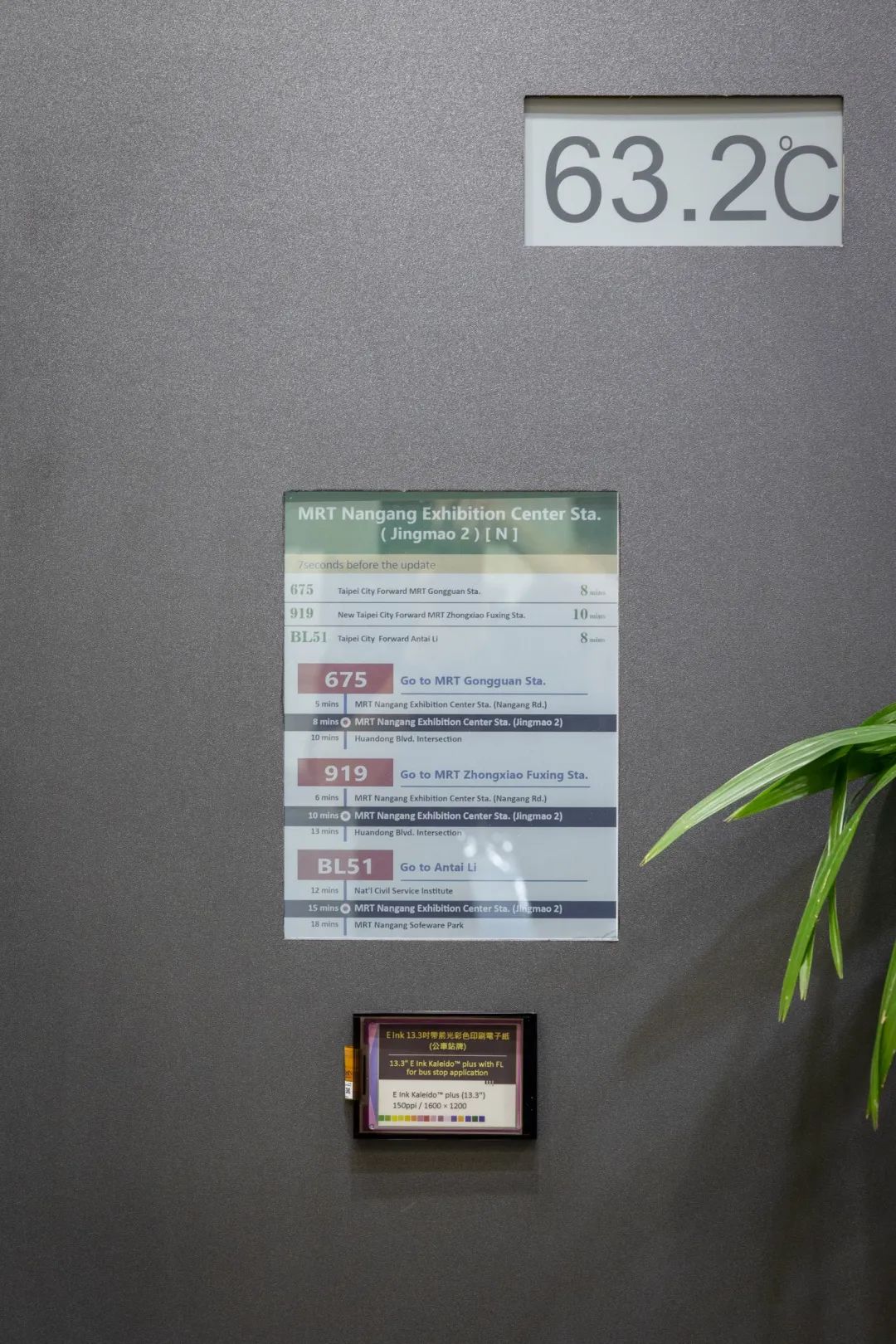 E Ink exhibited in 2022 that the high-temperature resistant Kaleido color e-paper technology, which can be extended to product applications such as outdoor billboards

Exploring the Role of E-paper in Smart City Construction

According to the "E-Paper Intelligent Transportation Application Market Analysis Report" of the e-paper industry blue book series edited by ePaper Insight, a subsidiary of CINNO Research, in 2021, the total number of outdoor e-paper bus stop pole projects in the world has exceeded 10,000 sets. And ePaper Insight predicts that with the maturity of e-paper technology, in addition to the existing black and white e-paper station that dominate the market, more colored e-paper station cards will soon enter the market, and at the same time achieve rapid refresh in seconds. With the advantages of construction layout, energy consumption, readability, etc., it is expected that the market segment of e-paper bus stop signs will also achieve continuous growth, and promote e-paper to actively make more attempts and innovations in the construction of smart city ecology.

RayClouds is a high-tech enterprise focusing on optical measurement. We took the market as the guide to launch E-PAPER OPTICAL MEASUREMENT SOLUTIONS, work with relevant manufacturers and R&D teams of e-paper equipment to optimize the display quality of products and help the display industry ecosystem complete important innovation.